The Cast
The Team

Garth Kravits has appeared on Broadway in the Tony Award winning musical The Drowsy Chaperone, and Gettin’ the Band Back Together.  His Off-Broadway credits include Old Jews Telling Jokes, Toxic Audio, and Smart Blonde. Kravits has appeared on TV in “Mr. Robot”, “The Marvelous Mrs. Maisel”, “Divorce”, “30 Rock”, “The Blacklist”, “Nurse Jackie”, “The Carrie Diaries”, “Hostages”, “The Hunters”, and “Tommy”. He is an award-winning filmmaker, writer, editor and composer. You can see his work at www.cutanddryfilms.com

Josh is over the moon with excitement to be a part of this incredible cast, crew and production team! He currently lives in New York. Credits include: Local commercials, Spielberg’s Lincoln, Georg in Spring Awakening, Tamino in The Magic Flute (adaptation), Benny in RENT, Tommy Dijilas in The Music Man, Mr. Black in The Wild Party, Chad Diety in The Elaborate Entrance do Chad Diety, Prentiss in Peter and the Starcatcher, Harpo in The Color Purple, Flick in Violet, Benny in In the Heights, and most recently Middala in The Book of Mormon and Standby in Come From Away. He would like to thank God, his family and friends for all of their support!

Richard started his career dancing with the legendary Ginger Rogers! Many projects, many shows, many highs, many lows. Mr. Waits is celebrating 40 years in show business. As a playwright, his show Mama Rose played LaMaMa. As a composer he was commissioned by Maxwell House Coffee and Pioneer Theatre Company. Upcoming feature film: Ramsey. Thank you: Agent Eddie Rabon and team at Take 3 Talent, Paul Hardt Casting, family and friends. Social Media: @RichardE.Waits

Broadway: Me and My Girl, Lady Jacqueline; Starmites, Maligna; Broadway, Ruby; also Three Musketeers; Annie and the pre-Broadway tour of Applause as Karen Richards. Off Broadway: Lust, Mistress Dainty; Ben, Virginia and Me, Sophie Tucker – NYMF Outstanding Performance award; also Prime Time Prophet; Comedy of Errors and American Princess. Janet has performed in 7 countries, in 3 different languages, including playing Sally Bowles in Jérôme Savary’s award-winning French production of Cabaret in Paris and throughout Europe. Ms. Aldrich was the first recipient of the Helen Hayes Award for her performance in Forbidden Broadway. She sings jazz, and occasionally performs with the Foggy Minded Boys. Janet is also known as “Glamma”. www.JanetAldrich.ACTOR @Janet_Aldrich

Recently, Joel was seen touring the country with the Broadway national tour of Charlie and the Chocolate Factory. He was seen as Lord Clapham in the Broadway tour of Something Rotten! In New York, Joel played Bob Hope and Jack Warner in the Off-Broadway hit Cagney. Joel’s Broadway debut was in the Tony Award winning revival of 42nd Street.  He was a member of the Broadway company of Mel Brooks’ The Producers. Other Broadway tours include the Chicago/Toronto companies of Elton John’s Billy Elliot and the Leo Company of The Producers. 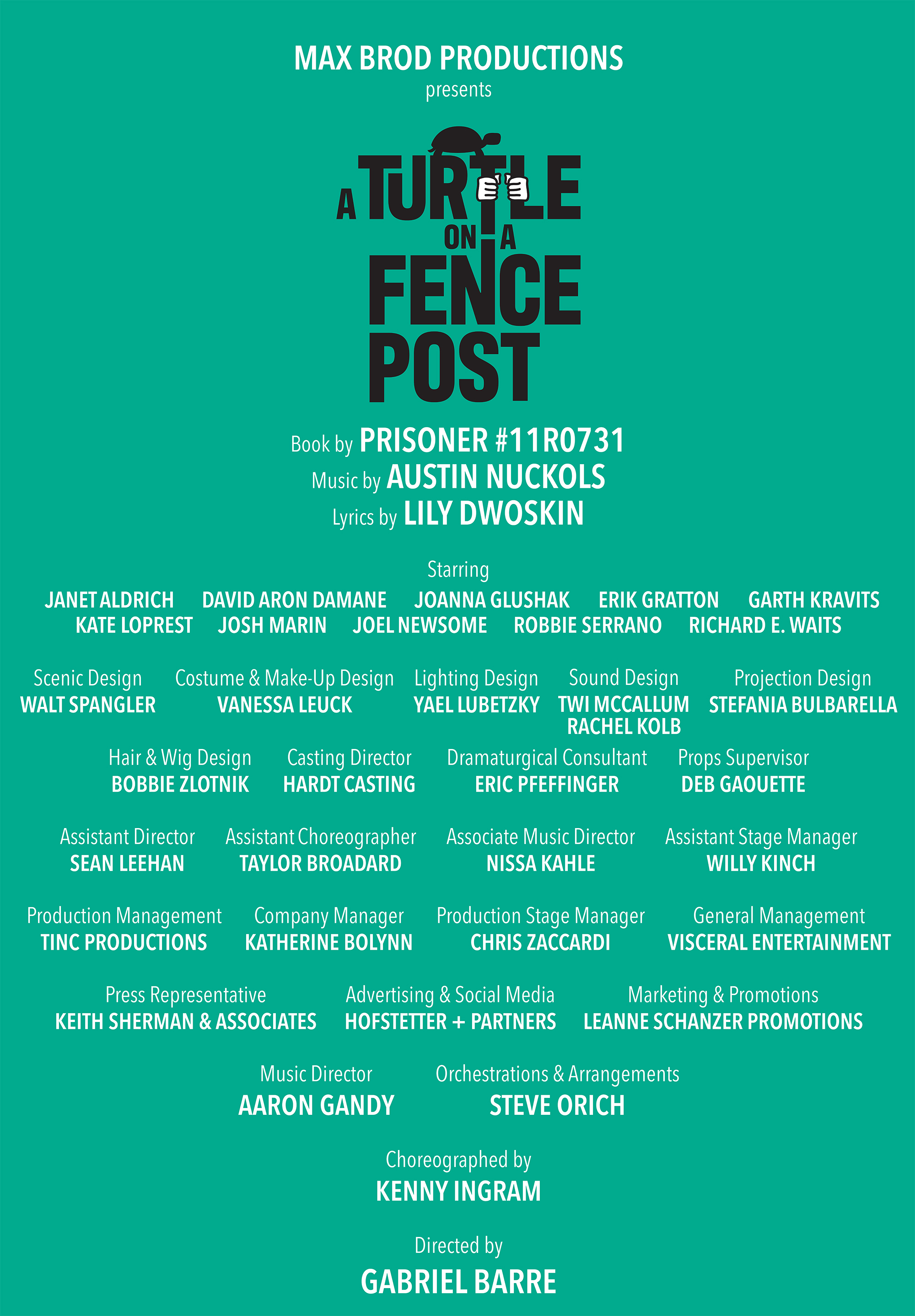 Austin Nuckols is an NYC based composer, writer, and pianist hailing from central Virginia. They studied Musical Theatre Writing at NYU, and have been spotted banging various pianos in the city since. Selected works include: The Scarlet Savior: A Comic Book Musical, (St. Luke's Theater), Hyena in Petticoats (NYU), and Please Say You Love Me Too (UCI) with long term collaborator, Lily Dwoskin. His other works include: Inside Cloud 9 for Dreamers/Firehouse Theatre: a devised musical about the troupe’s experiences with autism, and #adulting: a millennial opera (St. Luke's, 18th & Union) with his "musical theatre sh*tposting group," The Ballerina Kitties.

Lily Dwoskin is a lyricist, bookwriter, playwright, and amateur baker based in New York. She is a graduate of NYU’s Graduate Musical Theatre Writing Program. Selected works include The Scarlet Savior: A Comic Book Musical (St. Luke’s Theatre), The Aviatrix (AMDA), Please Say You Love Me Too (UCI) and Hyena in Petticoats (NYU). Lily works for and is a proud member of the Dramatists Guild of America.

Gabriel Barre is an internationally acclaimed director who directed Amazing Grace on Broadway.  Off Broadway credits include the original productions of Manhattan Theatre Club’s, The Wild Party by Andrew Lippa, Summer of ’42, john & jen and Almost, Maine.  National Tours include Amazing Grace, Pippin, and Cinderella.  Regional theatre credits include the original production of Memphis, at North Shore Music Theatre and Theatreworks in Palo Alto, CA; Soul Doctor at San Diego Repertory Theatre, as well as Billy Elliot, Sweeney Todd, Finian’s Rainbow and many new musicals at Goodspeed Musicals in CT. International credits include: Sound of the Silk Road in Xian, China, the Mexican premiere of, Billy Elliot (winning the Las Lunas Del Auditorio For Best Musical 2018 and nominated for 12 Los Metro Awards including Best Director), The Scarlet Pimpernel in Japan, numerous shows in Korea, and the Czech Republic, including the world premiere of the new Czech musical, Holmes, The Legend (still playing), and the Frank Wildhorn musical, Carmen which recently closed following a run of over a dozen years.  As an actor, he has been nominated for a Tony Award as Best Actor in a Musical and appeared off-Broadway, as Cyrano in Cyrano de Bergerac, which, he also directed.

Kenny Ingram is grateful to be Choreographing TURTLE ON A FENCE POST. Before the Pandemic he choreographed New York Times Critic Pick EMOJILAND Off- Broadway at The Duke on 42nd St. and During the Pandemic he Directed and Choreographed TRIPLE THREAT Starring and Written by James T. Lane at The Zeiders American Dream Theatre which is available for livestream. (thez.org) He recently Choreographed Jersey Boys at Maine State Music Theatre and will be choreographing SONGS OF A NEW WORLD at Paper Mill Playhouse this Fall.  Kenny looks forward to Directing and Choreographing BLUES IN THE NIGHT at Porchlight Theatre in Chicago this winter.  Social Media: Instagram: thekennyingram, Website: kennyingram.com, twitter: Kennyingram12, Facebook: Kenny Ingram Representation -Wright and Murray.

Walt Spangler designs for theater, opera, dance across the nation and around the globe. Broadway: Tuck Everlasting, A Christmas Story The Musical, Escape to Margaritaville, Desire Under The Elms, Hollywood Arms, and Scandalous. Upcoming on Broadway: the premiere of the Pulitzer Prize winning drama Between Riverside and Crazy and Romeo and Bernadette. Please visit waltspangler.com to see photos of Walt’s vivid designs.

Favorite theatrical credits include: She is thankful to be designing a robust musical in this time of pandemic, reckoning, and industry change. She is a former student of Howard University’s theatre department and a graduate of Yale School of Drama’s one-year sound program. When not working, she loves learning American Sign Language, playing zombie video games, and taking care of her pets: a goldendoodle puppy and seven snails.

Rachel Kolb (she/her/her’s) is a New York based Sound Designer, Mixer, and Composer. Turtle on a Fence Post is her Off Broadway debut! Selected credits include The Revival of Babes in Arms (Forestburgh Playhouse), You’re a Good Man Charlie Brown (Forestburgh Playhouse), Into the Woods (Carnegie Mellon School of Drama), Rock of Ages (Pittsburgh CLO). She received her BFA from Carnegie Mellon University School Class of 2021.

Eric Pfeffinger is a member of the Dramatists Guild and the Writers Guild of America; his plays have been produced at Actors Theatre of Louisville, the Denver Theatre Center, the Geva, and elsewhere across the country.

Deb Gaouette recent credits include:Smokey Joe's Café at Stage 42; On a Clear Day for Irish Rep, The Other Josh Cohen at Westside Theater,  Last Stop on Market Street, The Big Ten-O and She Persisted for Atlantic Kids Theater, Desperate Measures at The York and New World Stages,  Party Face at City Center, A Gentleman Caller for Abingdon Theatre, several shows for Atlantic Acting school and two many shows for Fordham University's Theater Department to list.

Willy Kinch is excited to finally be back and working with such a great team on this new musical. Broadway: Angels in America – Off-Broadway: Is Anyone Alive Out There; Motherland –  New York: The Scarlet Pimpernel at Lincoln Center; Laramie: a Legacy; Lincoln Center Spring Gala – Regional: Jane Eyre; Because of Winn Dixie; Quartett. Love and Thanks to Mom and Dad for all your support!

Katherine Bolynn (she/her) is a stage and company manager based in NYC. FSU BA in Theatre and International Affairs. Selected credits include: Party Face, Sweeney Todd, Seeing You, Sleep No More, The Doubtful Guest, The Mar Vista, The Yellow Wallpaper, The Giant Hoax, Spamilton. www.katherinebolynn.com

Chris Zaccardi is thrilled to be back working in the greatest city on Earth.  Broadway:  Hello Dolly, Noises Off, Vanya and Sonia and Masha and Spike, The Anarchist, One Man Two Guvnors, Hair, In The Heights, 9 to 5, Wicked, Lestat, All Shook Up.  Off-Broadway:  Is Anyone Alive Out There, Disenchanted, Evil Dead & recent Tragic Events. Lots of tours and regional theater, former US Marine, and now the Head of the Stage Management program at Pace University. Much love to Niall and Monty.

Broadway: Jersey Boys (Tony Nomination - Best Orchestrations), The Cher Show, Priscilla Queen of the Desert. Off-Broadway: Snoopy, Personals, Romeo & Bernadette.  TV: Composer for documentaries, sitcoms, movies and specials. His orchestrations have been performed by the National Symphony, the Boston Pops, at Carnegie Hall, the Kennedy Center, the White House and around the world.